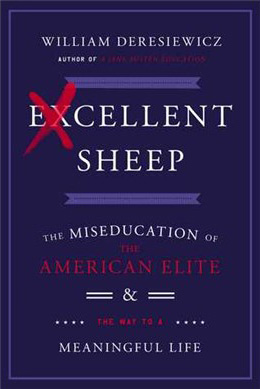 WHEN I WAS A JUNIOR at the Trinity School in New York, Mr. Clarence Bruner-Smith, head of the Upper School, assured me that I had an excellent chance of being accepted at Yale if I accepted the editorship of the school literary magazine. I thought that a ridiculous reason to be accepted anywhere, and that Yale University couldn’t be all it was cracked up to be if it thought otherwise. I turned down the position (which was accepted by Richard Neustadt the Younger, son of the political scientist and advisor to the late President Kennedy) and ended up at Columbia instead. Several years later, my sister was not granted a diploma after four years at Smith for failing to satisfy the physical-education requirement. Today, I suspect two people guilty of such insane behavior would be found mentally incompetent and locked away for life in some asylum, perhaps even Yale or Smith.

William Deresiewicz, whose Excellent Sheep produced an effect last summer that was part sensation and part scandal, was professor of English at Yale for ten years before being refused tenure, owing apparently to a slim publishing record limited to A Jane Austen Education: How Six Novels Taught Me About Love, Friendship, and the Things That Really Matter. In Excellent Sheep Deresiewicz addresses, among other things, T.S. Eliot’s argument, made back in the 30’s or 40’s, that a prestigious education is modern society’s gateway to the liberal democratic aristocracy. No wonder, then, that his book, some of whose ideas were developed in essays published in The American Scholar, The Nation, and The New Republic, has been widely reviled, along with its author, by American academics, and in extravagantly emotional language. Also, it has been widely read, to judge by its sales and the attention it has received in the press, by collegians, prospective collegians, and recently graduated ones—as well as by their parents, of whom Deresiewicz is particularly unsparing, portraying them as socially pushy and ambitious people who have a social status to maintain, or to achieve, through their children’s academic accomplishments and rewards. Indeed, one of Excellent Sheep’s most revelatory aspects is the impression it suggests of the social background from which a very substantial portion of the contemporary student bodies of the Ivy League is drawn, one that is described better as philistine than as civilized. Deresiewicz’s primary complaint is that young people who have been groomed for Ivy League colleges or their equivalents from the age of two, if not earlier, and who have spent their childhoods learning to play the violin and a winning game of chess, excelling at sport, getting themselves elected president of their student governments, and working summers in public-service jobs while contriving to achieve a 4.0 average at the best private schools by depriving themselves of a night’s rest, arrive, if they are successful, at the institution of their choice knowing neither what to do there for the next four years (except to maintain a 4.0 average) nor what they want from life, with the exceptions of money and status. (About half the typical graduating class at Harvard, according to Deresiewicz, accept jobs in finance or consulting.) For them, and presumably for the parents who raised them, learning and the arts are weapons of social warfare in survival of the fittest, not sources of delight. Education is nothing for its own sake, merely an unrelated end having nothing to do with contributing to and advancing civilization. The utter shallowness of the whole business, and of the people who are trained to be part of it, produces “leaders” of the sort we have had to endure for the past couple of generations: the Bushes, the Clintons, and the Obamas who, in their feckless ignorance, drag the country along in the direction of their own catastrophic choosing and call it “democracy,” while ruining the country at home and abroad; the credentialed but nevertheless pretend justices of the court system who confect bogus arguments to “discover” a right to homosexual “marriage” and defend “a woman’s right to choose”; the crooked financiers who learnt at school that winning, money, power, and position (more money) are the social criteria of an elite class, membership in which should not be compromised by the responsibility they share for helping the politicians wreck a global economy.

This being L’Année de Piketty, Deresiewicz is exercised by the degree to which the elite educational system has contributed to “inequality” in the United States, and elsewhere. My own conclusion after reading his book is that the Ivy League and the other elite schools are in fact not unequal enough in their preference for meritocracy over aristocracy, which alone is capable of supporting through patronage and other encouragements, even when it does not directly contribute to, civilized life and accomplishment. Since there must always in any human society be an elite, it might as well be a true elite, which is what aristocracy is. But though meritocracies can develop overnight like mushrooms, aristocracies are produced only over generations. Deresiewicz counsels radical thinking to tackle the problems that are destroying higher education in the West and around the world, but he is not sufficiently radical to suggest that civilization rests on two supports: aristocratic institutions and a solid and pervasive religious faith, for which Deresiewicz has no use. Since the 19th century, he explains, the humanities have become a replacement for religion; he ignores the fact that the humanities cannot account for themselves and that they require a supernatural context to be fully comprehensible. In this respect of course The Nation and The New Republic are no better schools to go to than Yale.

Excellent Sheep, added to the experience of watching the children of friends and family confront the Terror State that elite education in America has become, has caused me to reflect on what my own situation might be, were I applying to college today. In 1964-65, the madness Deresiewicz so effectively describes had already begun in the admissions system, but it had yet to touch academic life itself. While his account of the first is unpleasantly recognizable after a half-century, the second is not. Columbia College in the late 60’s was an intellectually serious place, where the large majority of undergraduates worked strenuously at valuable studies that interested them for their own sake and that they expected to pursue in graduate school and later life. (The pressure exerted by hungry draft boards on a student to remain in the upper half of his class gave an added incentive to hard study.) But if life at Columbia today is indeed comparable to life at Yale as Deresiewicz paints it, I’d say the hell with it. In any event, my total inability to think mathematically, as well as, to a lesser extent, my extreme dislike of team sport and every other group activity, would be sure to bar me from any top-flight college. There are instances in life when the solution to a hypothetical situation involving the choices made, or not made, or not needed to be made in the past seems necessary for one’s peace of mind at a certain level, or in a certain compartment of the mind. Probably, this has to do with the need to assure ourselves that, had circumstances been radically different, we could have coped with them as successfully as we did with the ones we actually had to deal with, and that, having done so, we would be no worse off than we are today.

Whether or not that is so, I think—or like to think—that, were I 17 or 18 years old in 2014, I’d give college a toss and run away to Wyoming, go to work for an outfitter or hunting guide until I learned the ropes, start an outfitting business of my own, and write books during the long winter months. Publishers don’t care whether their writers have an education—today, indeed, to be better educated or more intelligent than the average American is a liability for an author—so long as their writing sells, while outfitting, unlike writing, actually makes money, though maybe no more than a marginal income, which still beats writing books.

The elite educational system today has succeeded in reversing the biblical sequence: First you go to Hell, then you live your life—assuming college hasn’t destroyed your ability to recognize life, or to live it.

Originally Published by Chronicles: A Magazine of American Culture NOVEMBER 03, 2014